“A Landslide of Interest”: Advice from the Year Sales Videos Exploded

Vidyard explains their ABM program, their journey, and what this means for account-based teams Many years ago, the video platform Vidyard was entirely focused on selling to marketers, but one of their sales reps broke the mold and began sending sales videos.

At the time, the platform wasn’t at all set up for it. That rep had to record in QuickTime, upload to Vidyard, and send to a list of one. They sat and waited for the view count to tick from 0 to 1. It did. That deal closed. Then so did another, and it ushered in a new sales product and then a new era—fueled by the 2020 pandemic—when it is now fair to say that sales is primarily conducted via video.

We sat down with Jesse Walsh, Senior Marketing Manager responsible for Vidyard’s ABM program, to hear about her team’s journey, and what it means for account-based teams.

Takeaway #1: When a demand tsunami hits, learn to surf

Jesse Walsh: Looking back at January of last year, we had 13 live events planned for the quarter. As things accelerated, I thought, “These aren’t actually going to be canceled, right?” But of course they were. Events are a big driver of net-new names for us and we had to figure out how to replace them virtually.

At the same time, we saw a landslide of interest in our video sales solution—an 80% increase in traffic across our sites. Our pages were blowing up with people looking for video software, how to sell over video, and how to look good on Zoom. Sales is a strong focus of ours but it wasn’t our primary focus, even though some of our leaders like Tyler Lessard have been beating the drum about it for forever. Now, people were knocking down our doors, and the changes kept coming.

Previously, we’d sold mostly to SaaS companies, but this new wave of buyers were largely from traditional industries like manufacturing and healthcare. And rather than coming in wanting to be educated, deals that formerly had 180-day cycles were closing within a week. It raised questions like, how do we measure things that have never happened before?

One way we adapted was to relax our sales process and allow some buyers to move fast. We had people coming in hot with burning questions who’d been tasked with finding a solution in-quarter. We also revisited our ideal customer profile (ICP) on nearly a monthly basis to ask, “Can we expect this to continue? Do the numbers support this?” I will admit, it was very tempting to go all-in on sales and capitalize on that interest, but we also wanted to maintain a good presence in the marketing space. We leaned into sales, but we struck a balance.

Takeaway #2: In a virtual world, arm your SDRs to stand out

It’s probably not groundbreaking, but webinars and virtual events are huge for us. With virtual events, you get more registrations because there’s no logistics and no travel expenses, but we also saw lower engagement. And whereas SDRs could previously walk the floor and come back with a good deal of hot leads, now, without that personal connection, they were lukewarm at best.

For that reason, we’re really focused on equipping our sales team for engaging people before, during, and after virtual events as we continue strong into 2021. Our team of course gets to use Vidyard sales videos, so prospects get to see and hear them, and it’s not just an anonymous text chat at a virtual booth. They’ll send a LinkedIn connection request along with a video link and that’s been really effective. Plus, they can see who watched and get a sense of their interests. We’re also preparing to launch a personalized tactile gifting platform for more tangible touches.

Video is only as good as it is used, and reps don’t always feel comfortable on camera right off the bat. It’s a new way of doing things, and they don’t want to spend their time on something they aren’t sure will pay off. That’s why you should get your VP of sales to give their updates via video and take video sales training courses. Also challenge your team—marketers included—to look through their calendars and pick a meeting that can be replaced with a one-way video update.

I’ve been surprised to find a lot of sales-adjacent marketers interested in sales videos. They’re curious how they can arm their sales counterparts to better follow up on the accounts they’ve engaged, and it’s all part of this very serious movement toward leading with more value and account-based selling.

Inboxes are swamped. People really have no choice. Marketers must get more targeted and more selective because it’s just the most efficient way to spend your budget.

Given everything you’ve learned this year, what will you leave behind?

I’d leave behind not thinking enough about scale. Early in the year, I asked the BDRs to perform super-detailed account mapping for every single account and in the end, the payoff just wasn’t there. It was hugely time-consuming for them, and of course it didn’t scale like we needed it to.

What will you take with you?

I’ll focus on messaging to people more based on persona and less on their lead source or initial interest. There’s often so much more to discover, and we want to uncover the entire opportunity and help them the best we can. 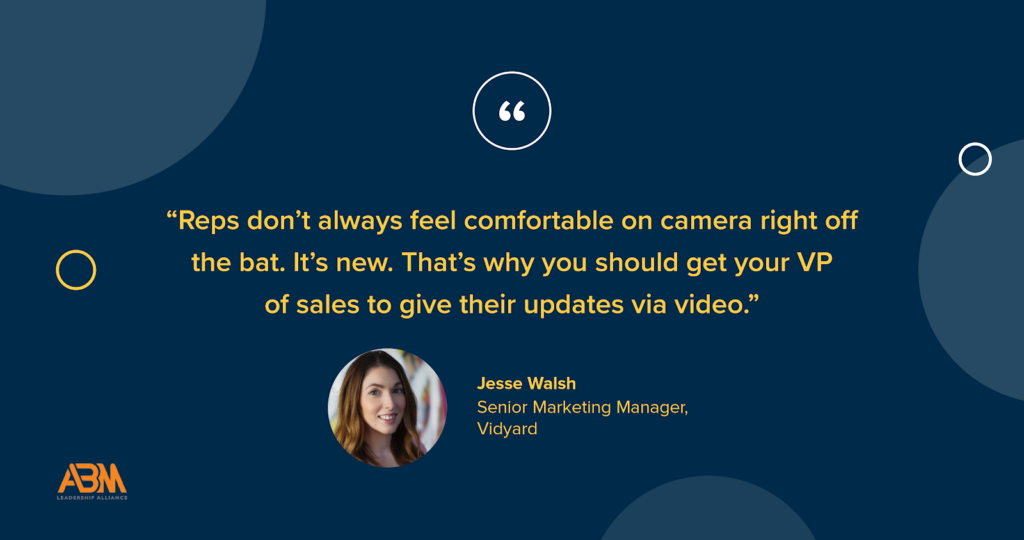 Stephanie Blackwell is Demand Generation Manager at Demandbase. In this role, she works as the coordinator for the ABM Leadership Alliance as well as running campaigns for Demandbase. She has a background in partner marketing and reality television production.

In this first-ever visual guidebook, the ABM Leadership Alliance brings all the advanced ABM strategies that you typically only happen upon by chance into one place where you can peruse, adopt, and practice.

This 4th Annual Benchmark Study, developed by ITSMA and the ABM Leadership Alliance, provides an essential review of the current state of play with Account-Based Marketing.

Episode 9: How to Use Video to Take ABM to the Next Level
Featuring Jesse Walsh, Vidyard and Alan Woks, Flywheel Consulting

Join ITSMA’s Rob Leavitt and a stellar lineup of ABM experts to dig into the hot-off-the-press data from the fourth annual ABM benchmark study.