Why the key to alignment is sharing metrics 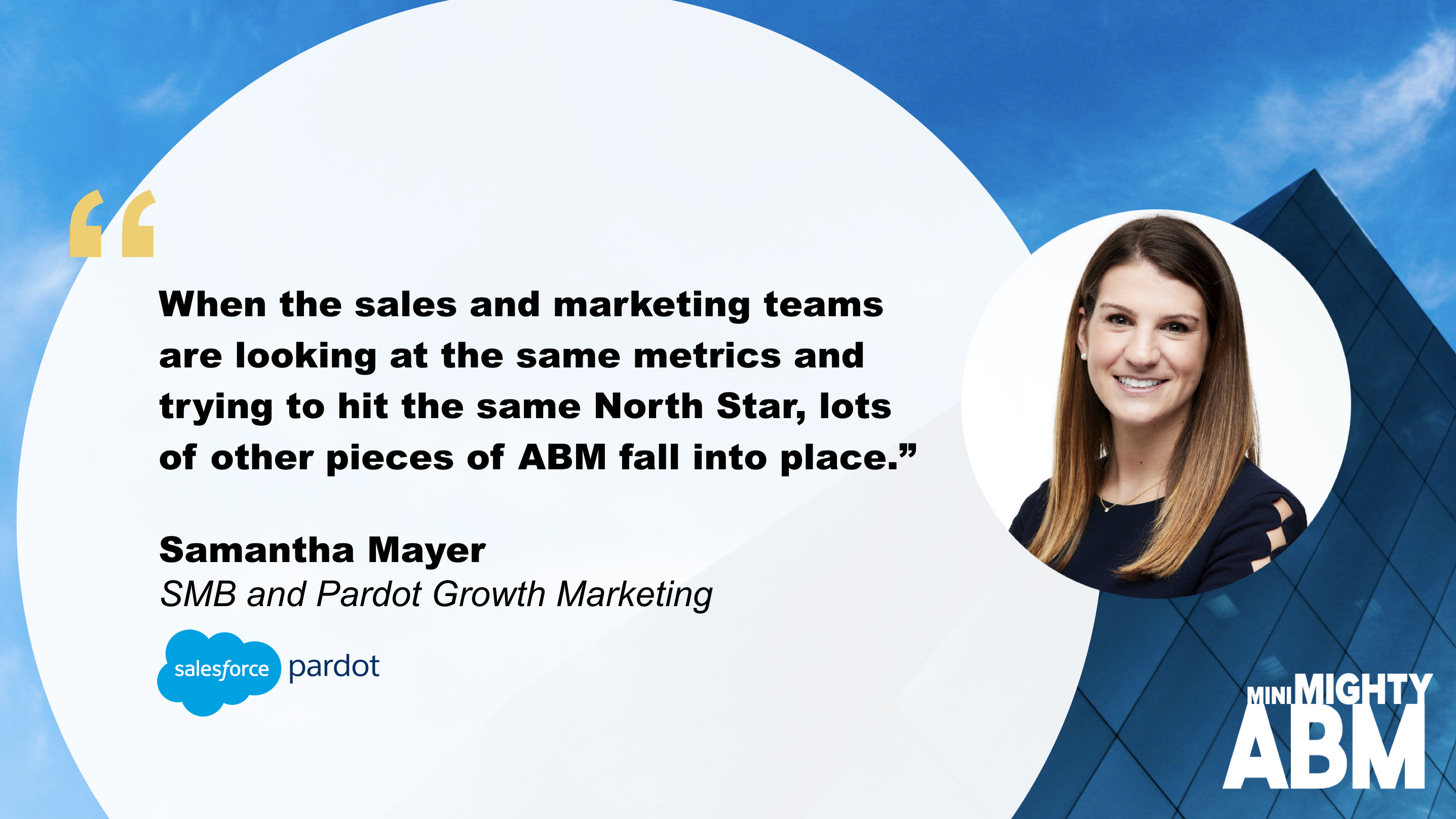 This article is part of the Mini Mighty ABM series where we ask top experts in ABM to share one actionable idea that you can use at work today. These tips are mini, but mighty. For more, visit ABM Revealed.

I started my ABM journey in the lowest-tech way possible: I dialed people in my network who were already doing it. I had been tasked with coming up with a unified account-based strategy at Pardot and while teams here had been practicing variants of it, we needed to organize. I asked my network, where do I begin?

Each person I spoke with had a different spin, which was great—I got to pick and choose ideas—but there was a clear through line: ABM isn’t ABM if the sales team isn’t involved in strategy, and that begins with agreeing on metrics.

When the sales and marketing teams are looking at the same metrics and trying to hit the same North Star, lots of other pieces of ABM fall into place.

Alignment isn’t something you can just turn on. It’s a living, breathing strategy that’s iterative and takes time. But I’ve also learned that software is a huge help if it gives everyone a view of the same metrics. It’s easier to steer in the same direction when you’re in the same vehicle.

Anyone can start where we started: Agree on a revenue-based North Star metric. That’s a conversation with all customer-facing teams that needs to happen both bottom-up and top-down. You need your organizational leaders to signal that alignment is important, but you also need conversations between individual contributors about the operational nitty-gritty—like which metrics matter and why.

Our sales team was unusually receptive—perhaps it’s because the Salesforce culture encourages experimentation. This was a pretty big departure from my roles at previous companies where I’m pretty sure my sales team had no idea what the marketing department did, outside of planning events. Back then, I’d devise marketing campaigns entirely on my own, present them to sales, and run them. But with the new paradigm, my sales team and I approached ABM together by discussing what they needed and how we could work together.

I’m not going to say sales agreed upon it right away, but being present was key. I began thinking of myself as an extended part of the sales team. I attended their leadership meetings. Anytime they talked about a sales forecast or metrics, my team and I were included. Marketing slowly became a trusted advisor, not just a separate entity planning events and lobbing leads over the fence. Sales grew to ask for suggestions and for us to inspect their pipeline and vice versa. We made sure sales was included in all stages of marketing strategy.

Now we’re at a point where everything we do is circular: Marketing nurtures accounts for sales and sales brings accounts to marketing to nurture. It works because we’ve built up a mutual understanding around joint metrics. We have the same North Star, and if we’re both working toward it, we’re in lockstep.

You’ll know when it works

The biggest moment for us was when sales’ numbers fell short of forecast and nobody pointed fingers at marketing. There was no blame, only talk of how to drive more demand. The sales team knew everything we had been doing, knew it was a team effort, and could see the story for themselves in the numbers. Now, years of tight alignment are really paying off.

We recently closed a Tier 1 account that we had been pursuing for two years. The team there cited a few pieces of our ABM strategy that helped win them over. They really felt that we understood them and it wasn’t a coincidence, because it took a lot of work and our teams cooperating. The customer didn’t recognize it as ABM per se, but they recognized the effects. That’s the power of aligning on metrics.

Start by agreeing with sales on a revenue-based North Star metric. Then, keep showing up to each others’ meetings.

Sam Mayer is a Demand Generation Manager for Salesforce Pardot, and has been with Salesforce for over 3 years. She also has her Masters in Marketing Analytics from New York University.